It was a true pleasure to play reflections on Matisses beautiful Red Studio at MoMA in their wonderful concert hall, first a solo piano set and later a double grand piano duet with the amazing Kris Davis.

Thanks so much to MoMA – Museum of Modern Art and AFSMK – American Friends of Statens Museum for Kunst for an incredible concert event. What a pleasure to collaborate with executive director Hanne Støvring AFSMK, chief curator and researcher Dorte Aagesen and art educator PhD Mette Houlberg SMK, and not least chief curator Ann Temkin MoMA, whose opening remarks were just superb.

Below some words on the composition processes of the music I wrote. This is based in my ongoing artistic research project Transformative Reflections finishing in December 2022, about translating and getting inspiration from painting to music.

Really looking forward to the Copenhagen edition of the concert at SMK November 23rd and to have another slow looking experience at the exhibition when it opens in Copenhagen October 12. 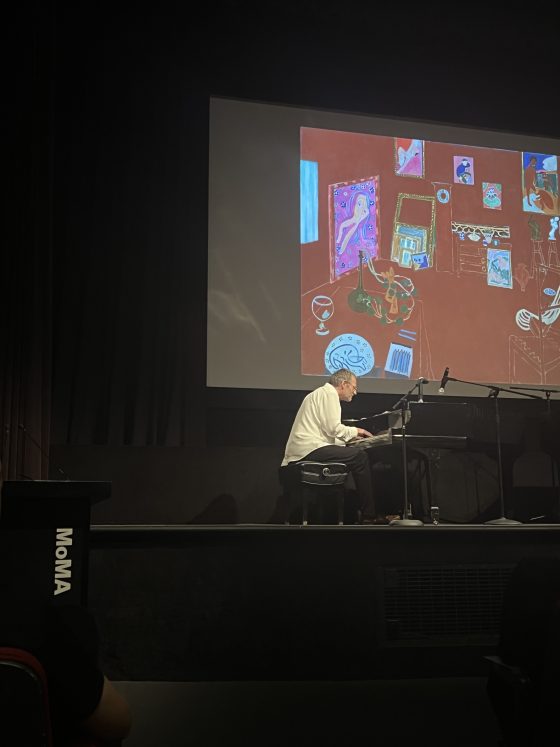 I chose eight short different perspectives on the Red Studio, based in the methods from my artistic research project Transformative Reflections (2022), about translating and generating inspiration from visual art to music. My general method falls in four main categories: intuitive, element-analytical, concrete, idea-analytical, and a fifth perspective reflecting the music back to the visual art, and being in dialogue with it and transforming the experience of both.

My musical perspectives on the Red Studio were based on a number of inductively chosen angles:

In the specific area, I was focusing on four rectangular parts with different atmospheres and attributes; the artworks in the artwork and the overall Venetian red; the circular movement and the different iterations of figures and elements; relations between the colors and between the underlying colors, and the figure/ground inversion.

From an underlying idea based perspective I worked with how I experience the artistic intuition and philosophy in the painting; the inspiration it has given to future visual art creation and music; a recurring feeling of suspension of space and time and balancing the figurative and the abstract; and the currents and music of the time of the painting.

First, I let a short musical phrase or element represent each of the eleven artworks in in the painting with an underlying representation of the venetian red. Then I went to a piece created with the original underlying three main colors represented by three underlying tonal centers, resolving in a fourth, representing the final red.
I then took a very systematic and trip around the grandfather clock in the middle, with the colors from the works in the Studio translated to intervals in the music via the color circle and the circle of fifths, and the rhythmic placement translated from the spatial placement in relation to the clock face.

First transformation
That transitioned into the figure/ground inversion in the painting translated to musical reflection of that, on the accompanyment of an abstraction of the venetian red color, represented by an underlying harmonic connection to American composer Morton Feldman. Feldman made music for Mark Rothkos amazing monochromatic paintings in “Rothkos Chapel”, which again relates strongly to Matisses Red Studio.
Hereafter I made a quiet contemplation over the whole painting put into a sheet music system and read as such. This followed by RedS, a piece in four small sections, reflecting the moods of the four different rectangles in the painting, here starting in the left bottom. This piece was further unfolded in the finale with two grand pianos. Towards the end I reflected on the small but significant landscape painting, which I see both the light blue pens on the table and the gaze from the empty chair pointing towards. I represented this with a reworking and sketchlike version of an older five-note based composition “Trees”, which also contemplated the earthiness of the venetian red.

My final piece was an intuitive composition based on my state of mind after an early slow looking experience with the Red Studio, with the principle of look and wait for the music to appear in the imagination.
After first my and then Kris Davis’ individual different perspectives, we wanted to create a space for the artistic instinct. To me, this seems very present in Matisses sudden change of the painting in the end of the total process, possibly without him knowing exactly why he did it. We reflected this by planning a space for a completely unplanned free improvisation on the two grand pianos, except the idea of following the music in the moment, after hearing each others’ compositions and improvisations on the painting. Finally, we then landed in a double grand piano version with improvisation on the piece RedS.

I have written music from different perspectives on the Red Studio, based on my artistic research project transformative reflections, where I work on translating and getting inspiration from visual art to music. I work with 4 main categories of composing, that can flow into each other. The methods are intuitive, element analytical, concrete and idea analytical.

The inspiration I especially have taken from painting, is to focus more on what I see as equivalent to colors and spatiality in the music, and working with exploring this, even though there is also a storyline present at times.

Overall, I feel the Red Studio inspires to explore and expand ideas and look for new directions rooted in where I come from, and maybe first and foremost trust the artistic instinct and sensibility into unknown land.

I have aimed to both experience and understand the painting as much as possible, and have the music being close to that. There is also a strong element of making music that lives on its own premises, with the foundation in the inspiration from the Red Studio, and hopefully reflecting back on the painting.

So probably sometimes, you will find a slightly direct connection between composition, improvisation, and the visual image, and other times it will be more of an underlying concept, philosophy, idea, or mood, that hopefully still makes sense to you.

The inspiration I especially have taken from the Red Studio, is from the colors and sense of space, which I have translated into harmonic and rhythmic ideas in the music, with a sometimes melodic storyline present, representing the balance between the figurative and abstract.

I find there is both a meditative inspiration and a dramatic feeling in the Red Studio.

More on the methods and the pieces you will hear:

in the intuitive category, I have been sensing and absorbing the painting as much as I could, and written music from that state of mind and atmosphere. A daily process of looking at a representation of the painting and improvising and writing what my intuition tells me.

In the element analytical category, I have chosen some aspects from the Red Studio and translated to music elements and used these as foundation for the composition. For example the underlying blue, yellow ochre and pink and the final red on top of these, translated to 3 underlying tonal centers, ending in a fourth and final.

I combine this with a melodic and intervallic representation of the different lines and figures in the painting. I chose left hand intervals giving most possible harmonic color, and a lot of dimished chords, which have a lot of potential energy but not only one defined direction.

Finally have the aspect of four squares that have different undertones in mind, and the division by the arm-less clock in the middle.

where the final center only solidifies in the end, translating the color circle to an music circle of fifths)

combined with an on one hand intervallic approach representing squares and angles, and on the other hand more of a stepwise flow.)

In the concrete category, I have made a system for all colors in the artworks in the Red Studio translated to intervals using the color circle and the circle of fifths.

I have then strictly processed and placed these sounds rhythmically in the music correlating to where they are placed in relation to the clock in the middle.

I have a short meditative piece where I have placed the painting on sheet music and read it as such with the objects as musical notes.

in the idea analytical category which in a way also sums up the proces, I have

-reworked one of my previous pieces “Trees” based on a fundamental pentatonic scale, as a representation of the earthyness, drama and trance in the red color, and also pointing to the significance of the landscape painting in the Red Studio.

-worked with the idea of exploring the suspended time, 2 and 3 -dimensionality and figure ground relationships, translated into both rhythmic and harmonic perspectives.

-with inspiration from composer Morton Feldmans music for Rothkos monochromatic paintings, which as I understand it, is hugely inspired by the Red Studio.

-the idea of reversing the figure-ground relationship.

-working with the four squares of the painting, and the numbers of 12, 4 and 2 that are present in a number of ways.

-the relations, connections and repetitions in the figures, objects and subjects in the painting.

-not least the idea of “It has not turned out the way I originally imagined. I like it, but I don’t quite understand it; I don’t know why I painted it precisely the way I did”, which I relate to as letting the intuitive ideas guide the music, and a philosophy of playing what my aural imagination tells me.

-the phrasing and dynamics and the shaping in the improvisations, I relate to

A short excerpt from the end of the concert, in the middle of the last piece RedS by Hess: 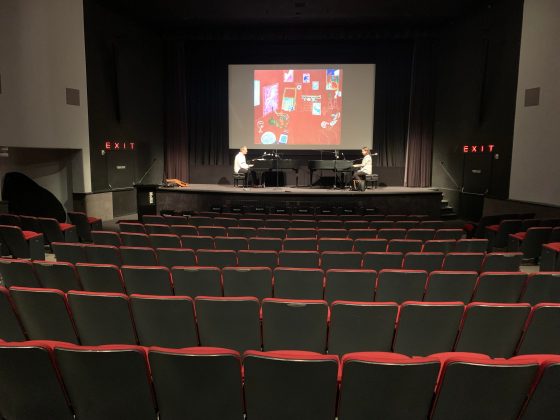 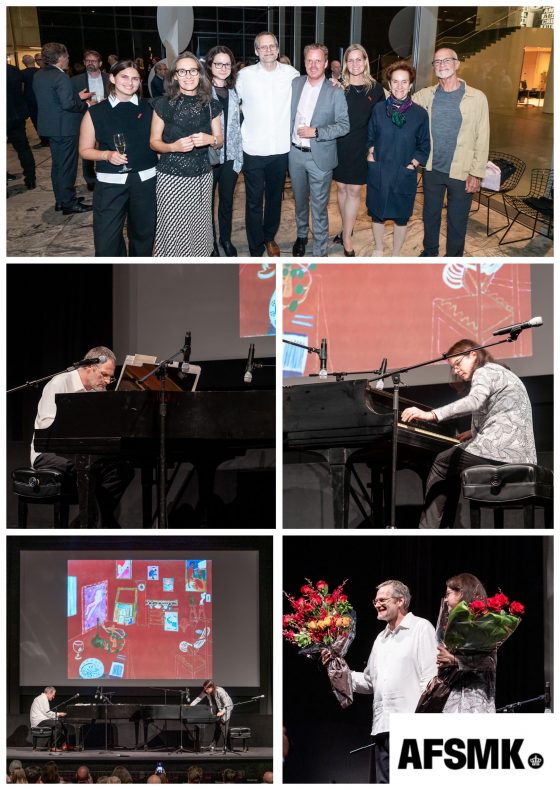 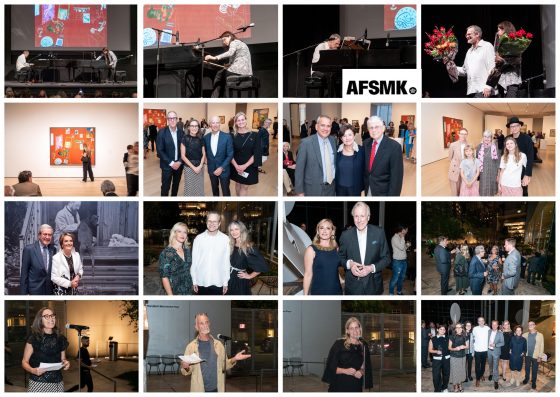